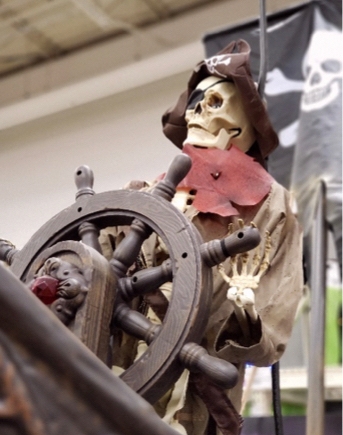 Davy was a smooth-talking sailor who pulled into a small port many years ago.

He could see that the town folk were a bit down and could use a change.

Davy began to tell of adventures he had across the Seven Seas and the great treasures that were there for the taking.

Day after day his deep, booming voice and ability to tell a tale captivated them.

His words filled their ears with promise, with excitement…with hope.

It didn’t take long before the whole town began to trust him and even consider him as one of their own.

He told them that he’d be having a special meeting and anyone who wanted to change the course of their future should attend.

Well…the whole town came out to hear what ol’ Davy had to offer.

“I’m putting ta-gether a crew ta sail with me for just three months…Cuz that’s all the time we’ll need ta get richer than we can bear!”

People rushed to sign on Davy’s voyage, but he could only take so many. He told the other town folks not to worry for there would be so much treasure that the crew could bring back enough for them to be rich too!

He called the chosen crew’s names out and told them, “Go get some rest me hearties for we leave port at dawn! Kiss yer kiddies and hug yer wives, for when ya return you’ll all live new lives.”

Ohhh, the excitement! They began to talk of how they’d spend their newfound wealth.

The entire town was dockside at dawn to see the lucky few off on the adventure that would save them all.

There was just one small problem…Davy Bones was nowhere to be found. His ship was gone!

It’s too bad they didn’t have the ability to Google Davy or do a background check on him.

You see, while he was having his special meeting his real crew was inside the homes of the town folk robbing them of what little they had and sailed away with their dream.

The moral of this tale…there are NO SHORTCUTS in pursuit of your dream.

How can you avoid being shipwrecked on the Rocks of Quick Relief or deserted on the Island of Empty Promises?

My friends, the future is a great sea of adventure and your hard work is the wind in your sails.

Take hold of that wheel and drive your dream with a firm hand…DON’T let Davy drive it!